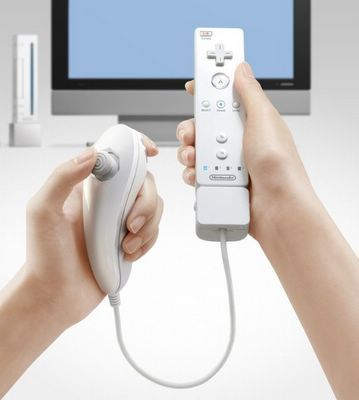 Oh, it’s revolutionary alright. I mean, just look at it! Isn’t it beautiful?

Here’s what one of the news pages had to say:

On Friday morning in Japan, Nintendo President Satoru Iwata kicked off this year’s Tokyo Game Show by unveiling a white prototype Revolution controller that looks more like a TV remote than a gaming device. In a break from 20 years of hardware designs, it’s designed to be used with just one hand.

"The feeling is so natural and real, as soon as players use the controller, their minds will spin with the possibilities of how this will change gaming as we know it today,” Iwata said in a statement.

Does that not blow your mind?! It will be like playing with an EyeToy 24/7! Their example of how the motion sensors could be used was in a fishing game. You would actually throw the controller forward to cast, and pull back to reel in.

Unfortunately, I don’t think the Revolution will be available until 2006. The XBOX 360 is set for release on November 22nd, 2005. I don’t think PS3 has a set release date yet. If it does, please let me know!

There are some other really cool images that I didn’t include. Search around with the link provided below.

Look at a bunch of Google News articles